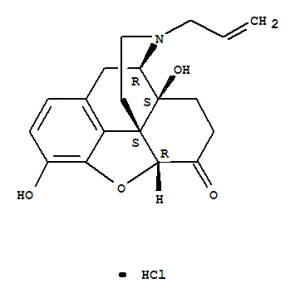 Naloxone is an opioid antagonist medication used to block or reverse the effects of opioid drugs, particularly within the setting of drug overdoses which are rapidly becoming a leading cause of death worldwide. More specifically, naloxone has a high affinity for μ-opioid receptors, where itacts as an inverse agonist, causing the rapid removal of any other drugs bound to these receptors. When taken in large quantities, opioid medications such as morphine, hydromorphone, methadone, heroin, or fentanyl are capable of causing life-threatening symptoms such as respiratory depression, reduced heart rate, slurred speech, drowsiness, and constricted pupils. If untreated, this can progress to vomiting, absent pulse and breathing, loss of consciousness, and even death. Naloxone is indicated for the rapid reversal of these symptoms of central nervous system depression in opioid overdose. It’s important to note that naloxone only works on opioid receptors within the body, and is therefore not capable of reversing the effects of non-opioid medications such as stimulants like methamphetamine or cocaine, or benzodiazepines like lorazepam or diazepam.